NEW BEDFORD - The Alma del Mar Charter School community came together to pay tribute to Frederick Douglass during a socially-distanced ceremony to celebrate the groundbreaking at its new campus, named in honor of Douglass, on Friday, Sept. 25, a press release from the school states.

“I have always been taught that a hero is someone who helps people,” Alma third grade scholar Trinity Olafikun told the crowd. “Frederick Douglass helped so many people. This is how I know Frederick Douglass was a true hero.”

Jamiel Tavares, an eighth-grade student at Alma, honored Douglass by sharing his 1847 speech ‘Farewell to the British People’ with the audience.

“I’ve always admired the story of Frederick Douglass and how he fought for others who couldn’t fight for themselves,” Tavares said. “The speech I chose, along with the opening quote, spoke to me as a middle schooler living in our current society when I often have to stand up for my beliefs even if I have to endure being made fun of by my peers or others.”

“We’ve come together to build a sacred space that belongs to young leaders like Jamiel and Trinity and his classmates that’s dedicated to nurturing wisdom, tolerance, and their ability to engage in scientific inquiry,” Gardner said. “What fills me with hope is imagining all of the brilliant thinking that’s going to happen here when it’s filled with scholars and teachers. Because it’s that brilliant thinking that — like the words of Douglass — will outlive our physical selves and even this physical building.”

As a charter public school, Alma does not receive the same state subsidies that district public schools receive to finance their facilities, and as such, Alma must use operating revenues augmented with fundraising efforts and low-interest financing through the Equitable Facilities Fund to build and renovate its new school building, the press release states.

Compass Project Management, the firm who led on the school’s successful construction project in 2015-2016, is also leading on this project, and construction is expected to be completed by December 2021.

Following an extensive process with the state’s Designer Selection Board, Arrowstreet was selected to lead on the architectural design of Alma’s new campus. A critical piece of Arrowstreet’s work has been to create environmental graphics that will costeffectively enliven the interior spaces of the school while also educating students on the campus’ namesake, the release states.

“Frederick Douglass had roots in New Bedford and we celebrate him in many, many ways,” Jan Baptist, chairperson of Alma’s board of trustees, said. “This is another way to recognize his oratory and the work he did in moving us forward. Today, more than ever, we need to keep moving forward.” 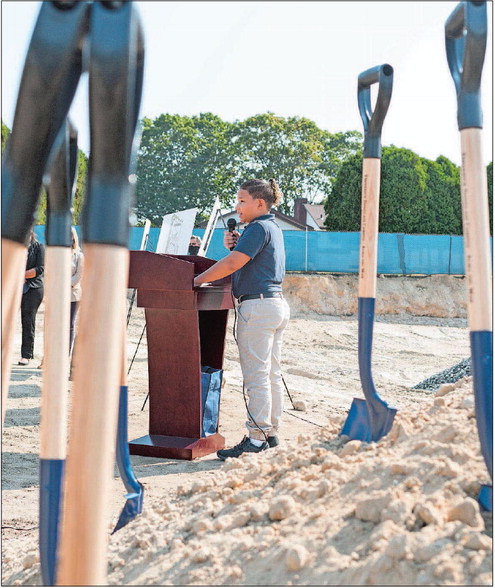 Jamiel Tavares, an eighth-grade student at Alma del Mar Public Charter School, honored Douglass by sharing his 1847 speech ‘Farewell to the British People’ with the audience during a groundbreaking ceremony for the school’s new Frederick Douglass Campus in New Bedford. [SUBMITTED] 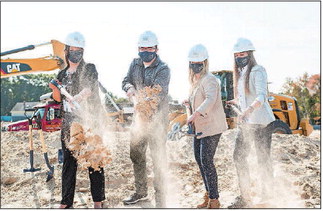 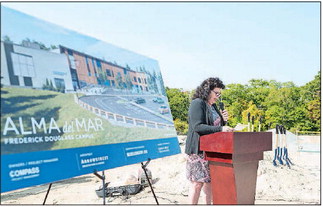 Jan Baptist, chairperson of Alma’s all-volunteer board of trustees, addresses the crowd during Alma’s groundbreaking ceremony for its new Frederick Douglass Campus in New Bedford. [SUBMITTED]

Click here to see this page in the eEdition: